Travel Hacking is life with credit card points and miles.

Travel Hacking is life with credit card points and miles.

We left Milan around 10am. We took a high-speed train, the Frecciarossa. While on the train, the kids were able to do their homework. I surfed the net and dozed off every now and then. This train was so fast and it’s no wonder we made it Florence in no time. Upon arrival at the station, we took 2 taxi cabs to Piazza di Santa Croce, this is where our apartment was located. It was only a 5 minute drive, and driving around Firenze for the 1st time, it felt like being in a Bourne Supremacy movie. The streets were crowded, tight…it was an organized chaos. Drivers knew what to do, and the pedestrians seemed to be cognizant of their surroundings. First impression….wow, it was just like everything I imagined it would be.

Our apartment wasn’t ready for us yet so we dropped off our stuff downstairs, and started to walk around. The cab driver mentioned Via Montanoia, a 10-minute walk from our apartment. We didn’t know where to go, but we let our eyes decide our fate.

We entered a market and walked around and found a crowd build-up in front of Panificio. No one spoke English so it was all about finger pointing and letting our hands do the talking. We ordered lasagna, a prosciutto sandwich, a pizza, and a couple of sodas….all for $11.50 Euro….not bad…that fed the four of us. Ben ordered something similar. There were no tables, but we managed to eat in this make-shift little dining area. I’m telling you, it was just what we needed. Nothing too crazy, just a  simple lunch with the locals.

We had 2 hours to kill before making our way towards our apartment, so what did we do? We crawled, we tippy toed from one coffee shop to a bakery, to a pasticceria, to a few shoe stores. We watched the crowds grow and diminish in some areas. It was an easy stroll that we did. I personally loved the alley ways, and the colors of this little town. It was just picture perfect. With that said, time to check our apartment. 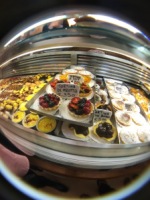 Don’t judge an apartment by its stairs
We entered our apartment and we were greeted by Filippo. We followed him 3 flights up. The staircase were narrow, and when you add our carry-ons and luggage, it was an out-of-breath experience. I was beginning to get very concerned. But I told myself, you’ve read the reviews, Jason, so don’t worry about it…..sure enough, once Filippo opened the doors, it was a wow moment – the hallways, lighting, the roomy bedrooms with private bathrooms, the trendy kitchen…and then bam….the views overlooking Piazza di Santa Croce. This apartment surely delivered the goods and we were happy!!! 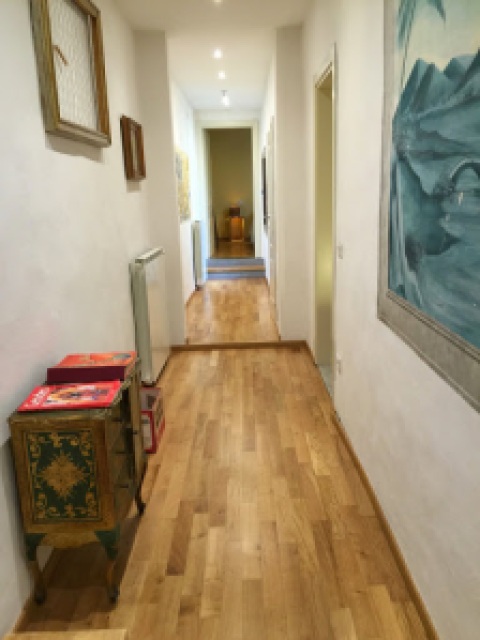 Em and Ben decided to take a nap, I hopped in the shower and asked Nancy to wake me up in 15 minutes…NOT. Darn you, Jet lag! I slept close to an hour, but it was a much needed rest. Shortly after, we all got ready and headed out for dinner.

Filippo recommended Club Culinary Toscana Da
Osvaldo and that’s where we went for dinner. At first got a little lost, I found another restaurant, Ristorante Del Fagioli, which looked very enticing, but I trusted Filippo’s suggestion. When we first looked at  Club Culinario, there was hardly any guests. But we went in anyway and were led to this almost-private room. Our waiter, Lorenzo, spoke very good English, and so we started to pick from the very interesting menu. We all ordered something different, the menu was quite unique. The most memorable were Ethan’s and Janelle’s pasta with sausage and black truffles. Madison, on the other hand, had an unforgettable ravioli with spinach. She enjoyed this one sooooo much, and the very generous tried not to share…she tried…but that didn’t work with me. i got a piece of her stuffed ravioli.What a relaxing dinner, great conversation, great company, and sumptuous dinner. 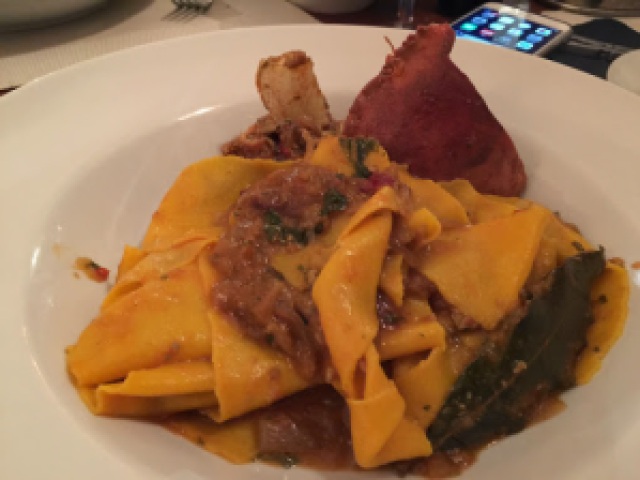 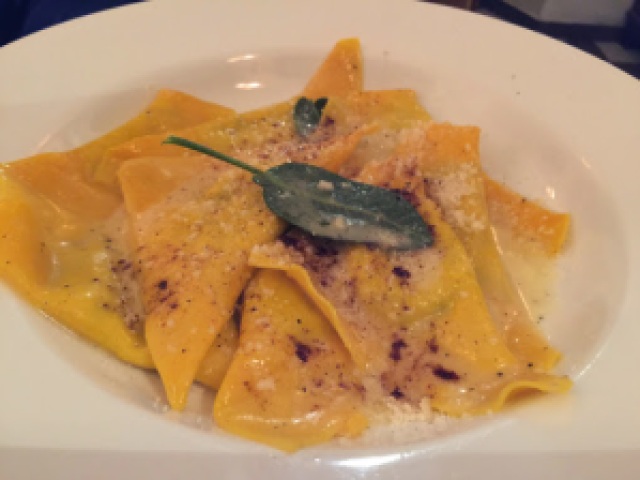 We explored the city center by walking towards Piazza de la Signoria took pictures of David outside Palazzo de la Vecchio and the Ufizi. Foodieness struck again and we found ourselves at Bar Berso for Gelato. That was a perfect way to end our first evening in Venice. The next day is planned to hectic so we needed our rest.

Whoever I talked to prior to this trip mentioned that we might as well go to
Pisa when we go to Venice. So we took the 9am train out of Firenze, and headed for Pisa. We got to Pisa around 10am. Took a cab from the station directly to Pisa. At this point, I had no idea that tower was going to be right —> there! I was pinching myself. I’ve seen hundreds of pictures of the Leaning Tower of Pisa, and now, there I was standing a few few feet away from it. Not long after, we found ourselves taking many pictures of the tower, oh the tourists that we are! That photo session alone took about an hour, different angles, etc….heck, this was an opportunity we never had before. By noon, we headed back to train station and made our way back to Firenze in an hour. 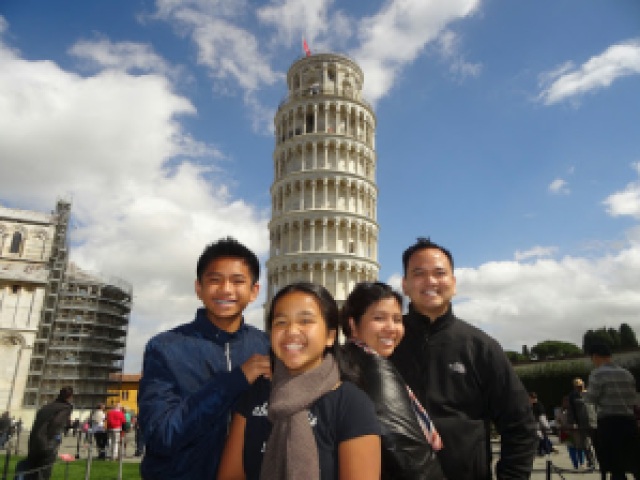 Since learning that we’ll be in Firenze, Ponte Vecchio was an attraction that was always on the top list. It’s basically an old bridge…really that’s all. Everyone else in my party did not know what to expect so they thought the other “bridges” had to be Ponte Vecchio. After convincing them that the busy market-crowded bridge was Ponte Vecchio, we all made our way on the bridge and again took dozens of pictures. The rest of the afternoon was spent walking to Piazza Duomo, the Ufizi, Palazzo de Vecchio in Piazza de la Signoria. For dinner, we went to  a restaurant I discovered by pure accident last night….Ristorante del Fagionli. Tonight, I vowed to return (against all odds). When we arrived at 8:15pm, there was a crowd waiting outside. Come to find out, I stumbled upon a Rick Steves treasure just around the corner from our apartment near Piazza Santa Croce. We were told 9:30 for our party of 8. This was worth the wait, Florentine classics, family-style, away from the touristy beaten path. That was great way of spending our last night in Firenze. This is definitely a place I’d like to visit again. Grazie, Firenze and Pisa!!! 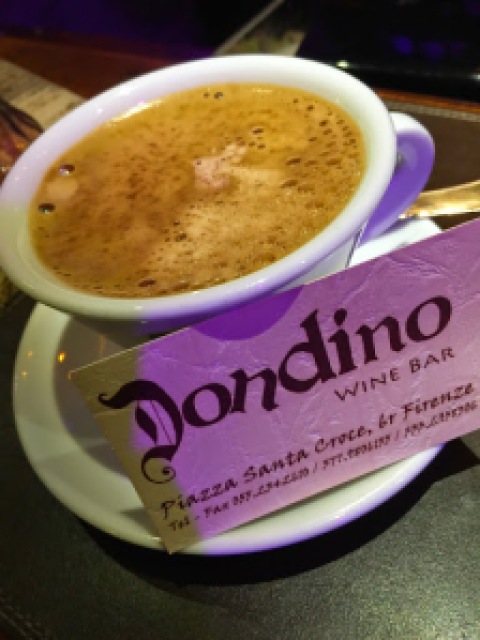 When you don’t have any luggage to check-in
I’m quite active on FB and Instagram when I travel, and the Grand Hyatt Playa Del Carmen Marketing Team stayed engage with me, followed me, and shared all of my stories and posts. Manuel and Montserrat took the time to meet me and Nancy, and extended their appreciation with a few signature souvenir items from the @grandhyattplaya They talked to me in detail about my experience not only at the GH PDC, but my visits at Andaz Mayakoba, Hyatt Ziva Cancun, and Thompson Main House. We also exchanged ideas about other Hyatt properties in Mexico that are worth visiting and we just might head there soon. This was truly a special time spent with this team. I just do what I do. I love to post and share, help provide information to encourage others to travel and explore. It’s what I love to do, and it’s not forced. I really appreciate Manuel and Montserrat for taking the time to sit down with us. They were really interested in learning my overall experience about the property and that speaks a lot about their program. We can’t wait to come back to @grandhyattplaya with our kids. It was truly a fabulous resort. Muchas gracias!!! #grandhyatt #hyattlife #ilovehyatt #playadelcarmen #mexico #cancun #rivieramaya #wanderlust #familytravels #smarttravels #travelonabudget #budgettraveler #marketing #swag #hotelswag #souvenir
Me. Book. Sun. Ocean. #vacation #playadelcarmen
I always get asked, “how do you know where to eat?” Plain and simple. Talk to the locals. Talk to the staff...ask them, “where would ‘you’ eat? My rule is get out of your comfort zone. Try something new. Some new restaurant that you don’t have back home.
Our Uber ride is here. $250 pesos to Cozumel. For the first time in 5 days here in Mexico, I am dripping in sweat. Pobrecito! 😂😂😂😂
Latest Maldives Travelzoo Deal