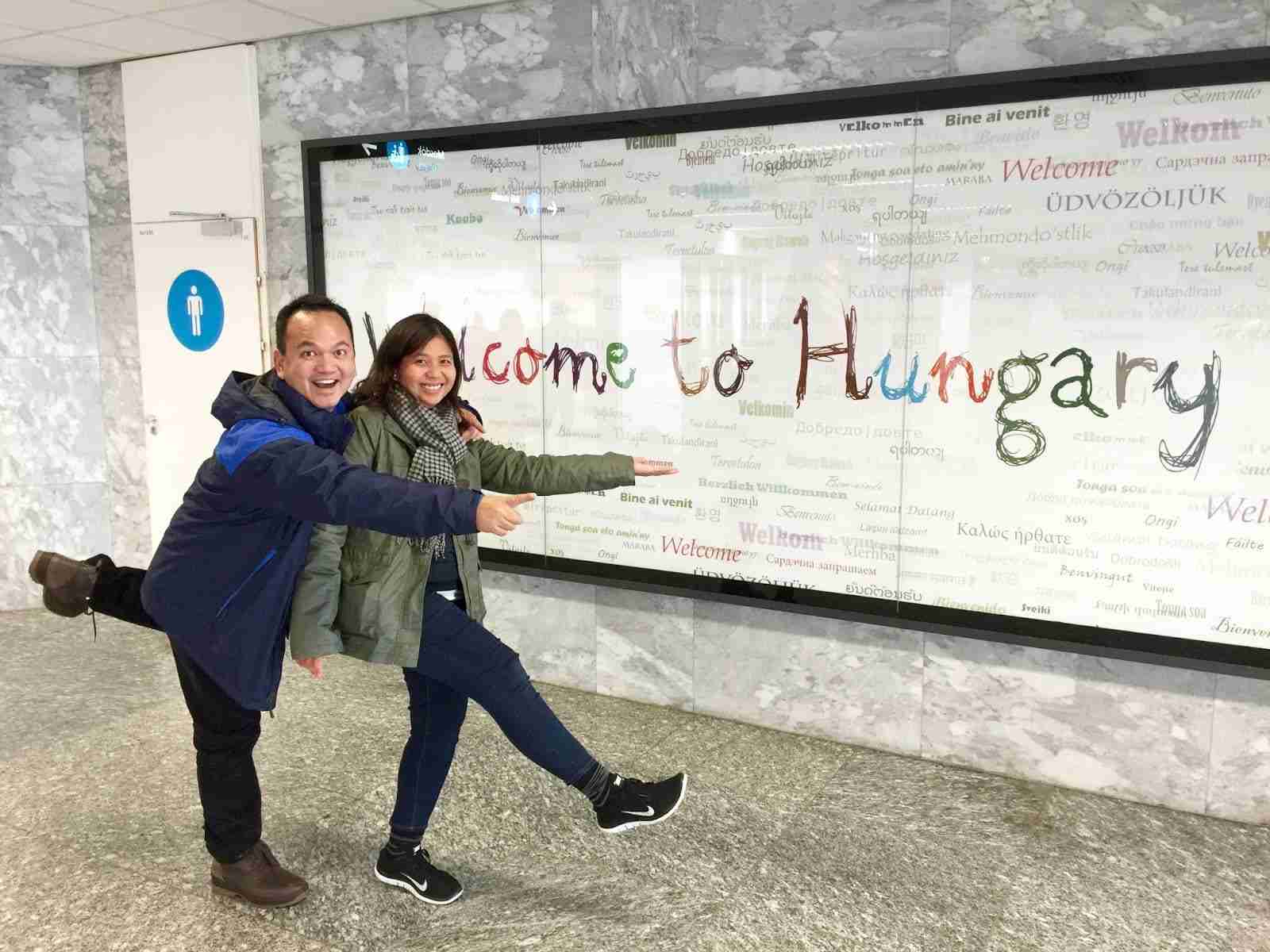 When we got to Sheena’s flat last night, we were able to do our laundry. That was really convenient. The only challenge was the unit was not equipped with a dryer, so we had to use a clothes rack and had a heater stand next to it to accelerate the drying. I finished yesterday’s blog entry around 1:30am (London time). We went to bed pretty late considering that we had to get up at 4:30am. Sheena arranged for a private car service for us en route to London Heathrow Airport (LHR). We had a flight that was scheduled to leave LHR at 8:15am.
As much as we only had 3 hours of sleep, it was enough for us to recharge our bodies in order to conquer the day’s travels. We woke up at 4:30am, checked up on our clothes, most of them dried perfectly. After taking a shower, we drank the tea and coffee that Sheena prepared, and next thing you know, it was time to go. The car service was downstairs shortly before 5:30am. It was time to say goodbye to our niece, thanks again, Sheena, for taking care of us during our first vacation in London. We’ll see you again very soon.
The ride to LHR

Knowing that we spent most of our days in London using public transportation, it was hard not to notice the ride from Sutton towards the airport. One thing was for certain, there were lots of roundabouts and turns. I was expecting that we’d be getting on the motorway to get us quicker to LHR, instead, the car service maneuvered its way by going through, in my mind, many residential type of communities. But we weren’t traveling slow by any means. That’s what made it interesting. After 35 minutes or so, we finally made it to LHR. But it took another 10 minutes to actually get to our terminal. LHR is unlike LAX, it is not a U-shaped airport…it’s huge.
Once we made it to Terminal 2, we had to check our luggage, and went through security. Our flight was at 8:15am, but we didn’t learn about our gate assignment until 7:55am. It was quite unnerving knowing that we were hanging around the middle of Terminal 2 not knowing which gate we needed to go to. Our flight was delayed by 15-20 mins, but other than that, once we got on the plane, it was smooth sailing from that point. To get to Budapest, we flew Lufthansa, and had to catch a connecting flight from Frankfurt, Germany. The flight wasn’t that long – over an hour or so. Once we arrived in Frankfurt, we had to deplane and we walked towards a shuttle bus. We got to Frankfurt International Airport (FRA) by 11:30, and our connecting flight was scheduled to leave at 12:15pm out of gate A1. We had to go through the Federal Police (I’m assuming that was their version of immigration agent), got our US passport stamped, and off we went to gate A1. Unlike LHR, thank you FRA for we didn’t have to walk far to get to our gate.

I was impressed. I mentioned earlier that I don’t expect much from our “American” airlines. With my flights going from London to Frankfurt to Budapest, each leg was only about 1.5 hours long BUT, they both provided drinks (including alcoholic beverages) and food at no extra cost. It may have been just sandwiches, but still… in the US, the only airline that I know that feeds you at no extra cost is Hawaiian Airlines. All other carriers I’ve used such as American, United, US Airways, Virgin America, and Southwest, drinks were provided but food was extra. I think it’s time to rethink and expect more from our US airlines.

The cost of the flight to Budapest

This flight was not extra. It was actually part of the flight from LAX to London. The visit in London was considered a stopover, then 5-6 days later, we took this flight from London to Frankfurt to Budapest, then we will be in Budapest for 4-5 days, and we then go to Prague. We won’t be flying, instead, we will be taking a bus from Budapest to Prague. That trip is separate (around 32 Euros or 40 something dollars for me and Nancy). Once we get to Prague, we will stay there for 4-5 days. We will fly from Prague back to LAX (using Lufthansa), and that flight is part of our LA to London to Budapest to Prague to LA arrangement with United Airlines. That flight is an open jaw, which means that we’re flying out of a different location (instead of flying out of London again).

I didn’t have to purchase the tickets separately. I learned about ways to make my airline miles work for me. If you asked me about this over a year ago, I would’ve thought of paying for each leg. But now that I’m getting to know my way around maximizing my mileage, we used 120,000 airline miles for this trip (the flights alone), and the only out of pocket we had to pay United Airlines (Lufthansa is part of United’s network of airlines) was $349 (total for me and Nancy). That $349 was to cover taxes, fees, surcharges, etc. I’m not that savvy yet. There might have been other ways to do this, but to fly the 2 of us to 3 different countries for $349 (roundtrip) made me a very happy camper.

The cards that could earn you points for a trip like this include:

Chase Sapphire Reserve
Chase Freedom
You would have to have an account with United for these points to be transferred to your United account.
Touchdown Budapest, Hungary
We arrived in Budapest close to 2pm local time. I had pre-arranged an airport shuttle for me and Nancy. It took about 20 minutes to drive in to the city. The area close to Budapest was nothing to write home about, but after 10 minutes of driving, the old Budapest I’ve seen in pictures began to appear. We finally made it to our hotel, the Art’Otel.

After leaving The May Fair Hotel, our next home for the next few days is the Art’Otel Budapest. It’s part of the Club Carlson network. Just like our stay at The May Fair, we also used points to stay at Art’Otel. These were points not from our credit card spending, but mainly points earned when we signed up for the credit card. We earned more than enough points to cover all our hotel expenses in Europe (London, Budapest, Prague), and I was also able to use 2 extra free nights at a Club Carlson property when I went to NY on a pleasure trip last March.

Upon check in, there was a separate queue for Club Carlson members. We lined up and were assisted by Reka. Check in was efficient, and she was ever so helpful. You know me,  I asked lots of questions.

We made it to our room, we’re on the 5th floor. Once we got in, I saw the glass doors which overlooked the Danube River, and of course, the enormous House of Parliament was right there, and from a distance, the Chain Bridge. No obstruction, just us and the Danube River, gorgeous!
Tired and Hungary
It was a long morning of traveling. We only had 2.5 hours of sleep last night. So we wanted to pace ourselves and just went with the flow. I posted a question on TripAdvisor about local places to eat authentic Hungarian food that’s not far from our hotel. I picked Hungarikum Bistro. But before we got there, Reka, the front desk receptionist, made our reservations for dinner at 7pm. We left the hotel at 6pm, and we walked for 5 minutes to get to the nearest Metro (subway train). We opted to get a 7-day pass (unlimited rides on the bus, train, trams, trolleys), and trust me, we’re going to make the most of it.
First impression of the Metro stations and trains? CLEAN…ROOMY!!! Plus, they work with somewhat of an honor system. There are no turnstiles. No ticket machines for you to swipe your pass, or scan your card. There were guards standing by the entrance, you show them your card, and you’re in. It’s unbelievably clean….I’m amazed. Good for you, Budapest!!!
We left the Batthyany Ter station and took the Metro 2 (red line)…this went underwater (the Danube), and the next stop was Kossuth Lajos Ter. We got out, and it was just a 5 minute walk to Hungarikum Bisztro.
It was a charming little restaurant, there was live music, a gentleman playing a cimbalom – which sounded like a xylophone. On the menu, we saw the Oven Knuckle of Pork (and it said good for 2), sure why not. We also ordered Chicken Crepes with Paprika Sauce. Both were sooooo delicious and flavorful, but that knuckle of pork though!!! Sheezzz….they lied! It was good for 4. It was a huge crispy pata-like dish.

After dinner, we decided to just head back to our hotel. As I wrote this blog, I had all the lights out, and to my right is the view of the House of Parliament. It’s like a postcard….good night!