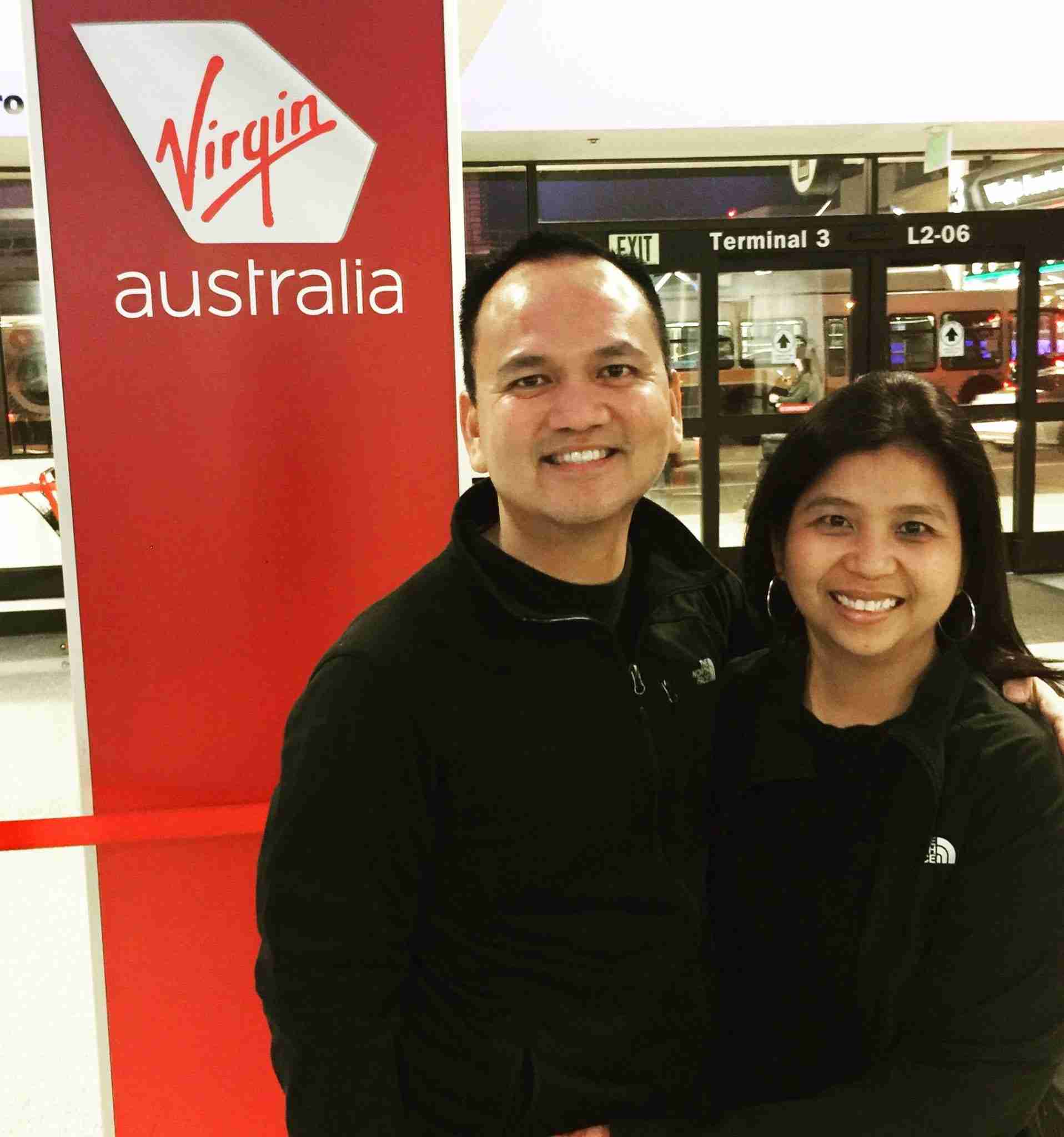 Our original plan was to go to Australia and explore Sydney during our entire stay. However, we changed it up a bit and added a Melbourne visit. To minimize time from going to the airport one too many times, we decided to go to Melbourne once we arrive in Sydney.

After nearly 15 hours of being in the plane, our Virgin Australia flight landed safely on Wednesday, 7:30am local time, (12:30pm, Tuesday in California). The approach to SYD gave us an aerial view of the harbor and not too far away was the Sydney Opera House. After deplaning, we headed towards the counter to get our passports stamped by the Australian Border Force.

We needed a Visa?

After traveling to Europe quite a bit these past two years, the thought of getting a Visa was not needed when we entered the European countries we visited. The US Passport is one of the most widely accepted passports that require no visa – over 170 countries and territories. So it never occurred for me to check if we needed a Visa to get in to Australia.

Back in September, Ethan casually asked me, “Dad, did you get your Visa to Australia?” I said in confidence that there was no Visa required (although I didn’t even check, I just assumed). Later that morning, to my surprise, we needed a Visa. So the thought of going to an Australian Embassy, getting all our paperwork together, and processing time all came to mind. We were two months away from our trip at the time. So I checked, and followed the links that led me to this.

It was a breeze. For under $20 USD, I was able to obtain our ETA or Visa. Everything was done online with such ease. So there, thank you, Ethan!!!!

It was only a matter of time

Once we made it in front of an  Australian Border officer, I handed him our passports, and I tried not to make any eye contact or any conversation. I’ve seen in many cases where some officers would ask a lot of questions. After looking at our US Passports, he then looked at me, and clearly, I looked very Filipino. He smiled and said, “First, you get Duterte, and now you get Trump. What are you gonna do?” That was enough to break the ice. I said “I told my friends no matter who won the election that I was leaving the country, but I’ll be back.”

Once we got our checked-luggage from the carousel, we headed for the Domestic Terminal which was just a 5-minute walk away. It was only 8:30am. Our flight was scheduled to leave at 11am, meaning we had 2.5 hours of wait time. We went to the Qantas counter and the agent offered an earlier flight, the 10am flight to Melbourne. We took it. The only drawback, there were no seats for us to be seated together. No problem. It was only just a little over an hour.

The flight left at 10am and arrived in Melbourne shortly after 11am. We picked up our luggage at the carousel, and found our way out to catch a Skybus, it’s the bus that took us directly to the city. The bus fare was only $19 AUD (around $14 USD). There was free WiFi onboard. It was only a very short ride to the city, probably 20-25 minutes. We were advised to get off of Southern Cross Station, and so we did.

We were quite hungry at this time. We had an option to eat, but we decided to get to our AirBNB apartment that we booked. We took a 5-minute cab ride to City Road.  The apartment is located in Southbank which was just right outside the CBD aka Central Business District. The owner couldn’t meet us but he instructed me that he left our keys with the concierge. Once we got our keys, we took the elevator to the 16th floor and walked towards #1604. First impression…the views, the views!

Next impression….very clean. It was a bachelor pad….but kept very clean. We didn’t book the entire apartment. This one had 2 bedrooms, 2 bathrooms, and the owner, Patrick, stays in the Master bedroom.  He and I kept in touch via AirBNB messaging. He was quick to respond, and it’s no wonder he has stellar reviews. This is home for us over the next 4 days.

I texted Patrick to let him know we made it to his apartment. He welcomed us and looked forward to meeting him later in the evening.

Off to the CBD

After we showered and freshened up, we made our way to the city. Melbourne’s CBD is known for their Free Tram Zone. As long as you travel within the perimeter of this zone, there was no need to purchase a transportation card aka Myki Card. That in itself was worth $6/person plus you have to top it off with an amount you want to load. Since the apartment was just right outside of the CBD, we had to walk for about 10 minutes to get to the free tram zone. It was a casual walk, and a beautiful spring day in the city (about 72 degrees).

Once we got to Flinders Street, we boarded a tram towards Chinatown. I was craving for dumplings, most specifically Xiao Long Bao. We just went with the flow and found Jin Dumpling House. There were quite a few people and they had lunch specials at $6.80 AUD (around $4 USD). We ordered their XLB and Pork Spare Ribs with Egg on Rice. There were so many appetizing items on the menu. The XLB looked small but so delicious. It was juicy. The ribs were tender, and the sauce was flavorful. As always, I added chili sauce to cap off my meal. Ok this is all for now. More later.