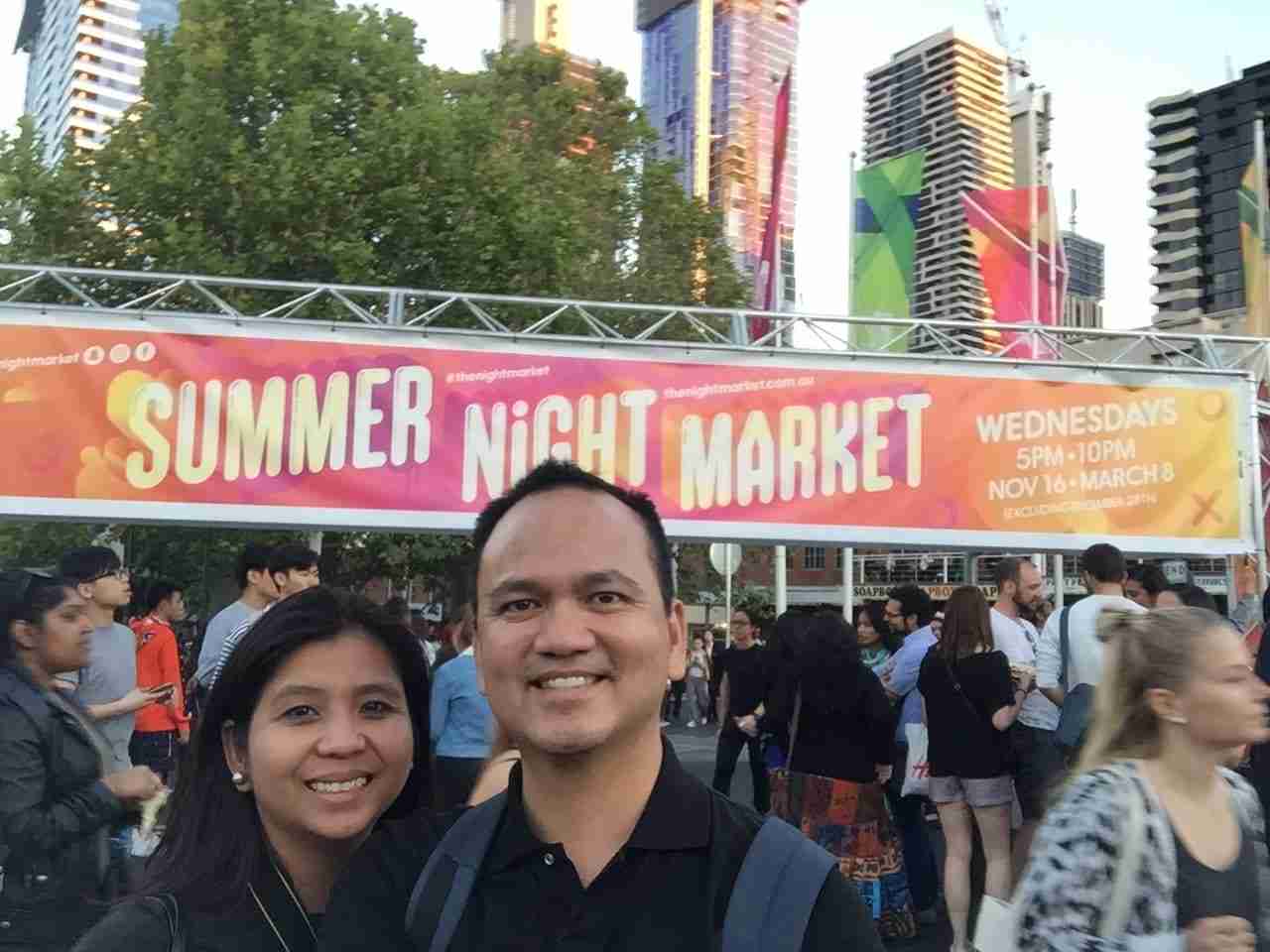 After we grabbed lunch at Jin Dumpling house, we just kept walking about the CBD and found ourselves at the State Library of Victoria. We went inside to check out the La Trobe Reading Room famous for its towering dome. We snapped quite a few pictures and also rested for a bit while in the Reading Room.

For the rest of the evening, the plan was to take a tram to Queen Victoria Market. We found out that their Summer Night Market began today, and it only happens every Wednesday through March. Of course we had to check it out.

First of all, the event took place inside a covered market. I was not prepared to see this enormous crowd. It was packed. There was a huge selection of food, and folks were lined-up to try the different culinary selection.We decided on trying the Risotto Balls and the Stuffed Squid.

However, the real star of the evening was the Pavlova. We ordered their Nutella Bomb Pavlova loaded with fresh strawberries, meringue, cream, nuts drizzled with Nutella. It was so delicious and eye-catching.

We had such a long day considering that we travelled close to 2o hours and still managed to explore parts of Melbourne. By 9pm, we decided to catch an Uber to get ourselves back to the apartment.

As much as we’ve stayed at many AirBnB properties in Paris, Venice, Milan, Florence, Maui, and a few other places, we’ve always rented the entire apartment. For this Australian vacation, since it was just me and Nancy, we opted to stay and rent a bedroom from an AirBnB host. In our case, the host, Patrick, lives in the apartment while he rents out the other spare bedroom. This was a first for us. It gave us an opportunity to talk to him, meet with the host.

We exchanged stories from where we all came from, in his case, he was from Switzerland. He’s a Food and Beverage manager in a prestigious hotel in Melbourne. After a few minutes, it happened….Donald Trump. Just as I had expected. It didn’t turn out to be a political conversation. He was more curious about our election process. I did share what I think I know about the Electoral Vote vs. Popular Vote. He also inquired about all the protests that were taking place since the election.

Patrick’s apartment is uber clean, so tidy. When you meet him, you get the sense that he’s organized. We’re fortunate to be staying here at his apartment in the Southbank.

Day Two – It’s my 45th Birthday Down Under

One of the restaurants that we’ve been reading about, and was also recommended by Patrick was Chin Chin. Mainly a Thai Restaurant with a hint of fusion. It’s pretty upscale and tends to get very packed. We were lucky that there was no wait when we arrived.

ed the Crispy barramundi and green apple salad with caramelized pork, chili & lemongras
s. It was so delicious. The greens for the salad was cilantro and mint. I never thought or have had mint in my salad, but it worked. I truly enjoyed this dish. We also had their Rendang Curry with Wagyu beef. It was a little too tasty for my palate. But it was still good as long as you eat it with plain sticky rice.

BTW, Day Two was a very hot day. In fact, whoever we talked to said that it has been quite miserable in Melbourne and we ‘re lucky to have come around this time. Lots of sun. After we left Chin Chin, we chanced up a few food trucks on Collins Street. Of course, we had to try something. We opted for the Lukamedes Truck. I had their Dark Delight with melted dark chocolate, crushed pistachios, and hazelnut ice cream. Ammmmazing! I wish they gave more hazelnut ice cream though.

We strolled around the Causeway and many artsy lane ways and alleys. Graffiti, legal graffiti-decorated laneways were so vivid, so colorful that they make their own statement. No wonder it’s a major tourist attraction in itself.

It’s my birthday and I did what I wanted. We chanced upon Hopetoun Tea Rooms. Their display walls invited us to come in. There was a wait, about 10 minutes. This is where Nancy and I had our afternoon tea. She ordered a jasmine tea while I ordered my all-time  favorite cake, Carrot Cake. The space was so quaint, and I’m glad we opted to go here for desserts.

Since it was quite warm, we decided to head back to the apartment where I just fell asleep for close to 3 hours. I woke up around 7pm, and got ready for the evening. We headed for another event that only takes place in November….it’s the Night Noodles Market. We took an Uber to get us to Birrarung Marr Park….a very spacious park. The admission was free. It was crazy packed with many Asian vendors. We supported our very own Filipino booth, Hoy Pinoy. They sold BBQ Pork Skewers, Chicken Adobo Fries, and Liempo with rice and Atchara. They were such a big hit. The line was at least 75-100 ft deep. It was a huge production with all the BBQ sticks…and the aromatic smoky air, they truly attracted the crowd. We tried other places…Yum Cha, Citi VIP lounge, Pork Baos…..so many to choose from. So glad that we opted to do this instead of just to another restaurant.

That’s it. That’s how I spent my Australian birthday, but I do know that Nancy and I have more in store during my American birthday which I will celebrate and write about in my next entry. Thanks for following along.