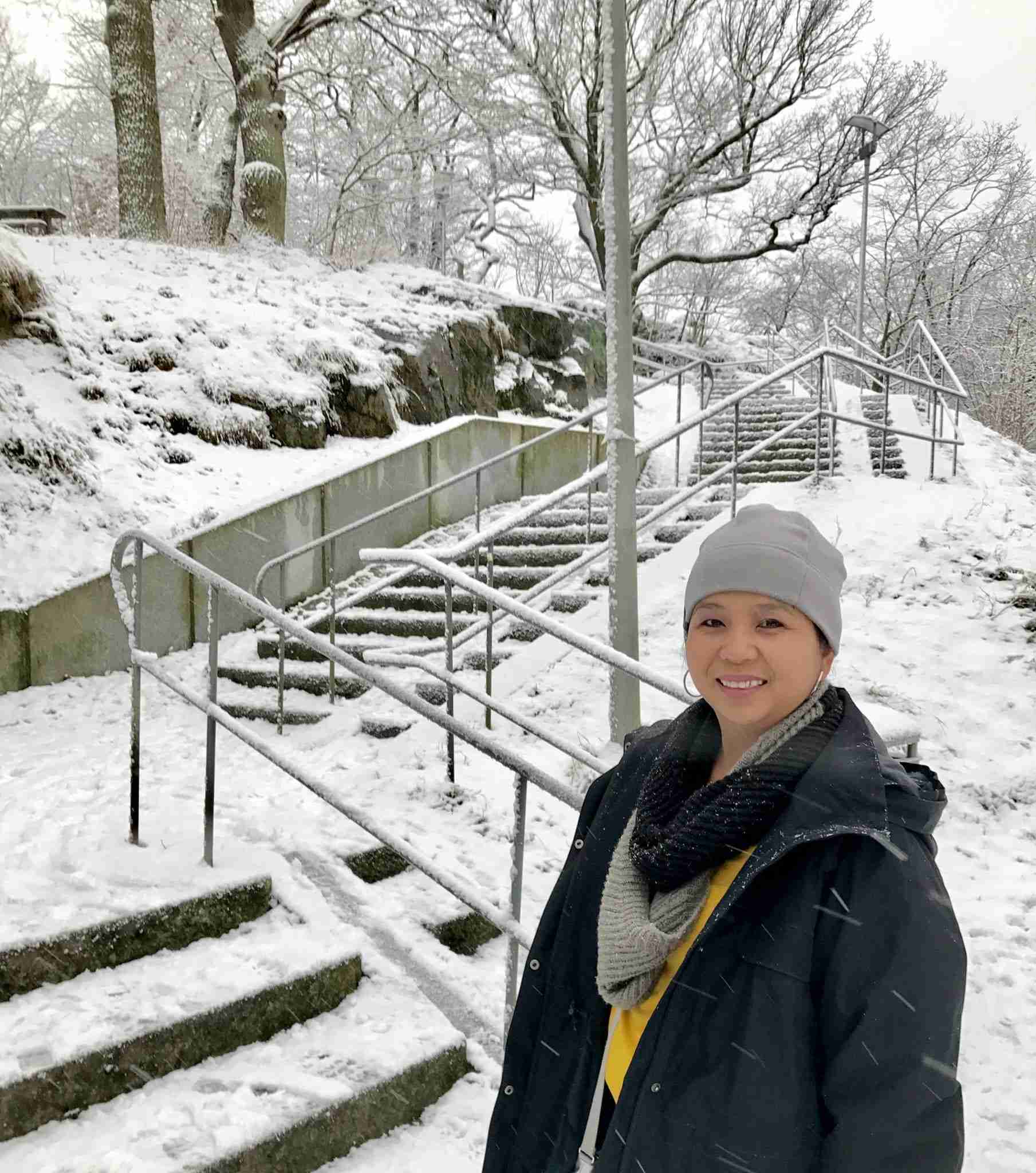 We got up early today with plans of having a sit-down, de

licious breakfast. We scoured the Internet regarding best breakfast places to eat, and most of them had many good things to say about Greasy Spoon. So we decided to give it a try. So glad we did.
We were out of the apartment before 8am.It was snowing, and since we were not used to seeing snow fall on a regular basis, we took pictures of ourselves
in the snow.

We took a bus from Sickla Udde to Tjärhovsgatan – about an 11-minute bus ride.

Click here for short clip of the snowfall that we captured around our AirBNB apartment.

After leaving Greasy Spoon, we decided to walk towards the water to get a view of the city and the Fotografiska Museum.

Soon after, we took a bus towards the City Hall, an enormous building built in the 1920s. They used 8 million bricks to build this humongous building.

After walking around the City Hall, we rode a bus towards Kungsträdgården. This section of Stockholm is home to many of the high-end stores. We stopped by a couple of them just to look, promise, that was it….nothing else  🙂

Back to my lost luggage, part of the Chase Travel Protection benefit (offered by our Chase Sapphire Preferred) included coverage for cell phone cables or chargers. I did not have mine so I went across the street from Chanel (Ana and Nancy were there browsing), and went to the M Store, an authorized Apple reseller and got a me a new lightning cable.

Soon after, we took a bus towards the Royal Palace located back in Old Town. One of the coolest things happened. As we walked around, we noticed a sign for the Royal Guards, a few of them were marching.

Then within a few minutes, one of the guys from the Palace approached us to stay clear of the entrance. We were then told that the delegates from Canada were on their way in. We didn’t realize that they were there for a state visit. Within a couple of minutes, bam….a parade of police cars and a few black Audis started to pull in.That was pretty cool. Click here for the clip that shows the cars as they entered the Royal Palace.

After leaving the Royal Palace, we walked a couple minutes towards the Nobel Museum. We timed it wisely. Every Tuesday, the entrance to Nobel Museum is FREE. Of course, we had to go.

The museum was not one to boast in size, but it was all about the content of the awards given throughout the years. From Albert Einstein, to the discovery of penicillin, to the age of digital cameras.

Halfway through exhibit, I remembered that back in 2009, President Obama received a Nobel Peace Prize. I couldn’t find where that was noted. So I approached one of the staff members, Gustav. He clued me in on something that is not shared with all the guests.

He pointed me to Bistro Nobel, a cafe inside the museum. There are many bistro chairs and tables. Each chair has an assigned number. He took one and showed it to me. He then turned the chair upside down, and under the seat was quite a few autographs. Gustav then went on to say that this became a tradition in the last 20 years. The awardees, Nobel Laureates, were taken to the museum as one of their first stops, then they were asked to sign under the chair.

So what was Obama’s number? His chair was #47. The chairs weren’t exactly arranged or scattered in numerical order. So it took a bit of a hunt to find the chair from the former POTUS. But after a minute, I found #47. Unlike the first couple of chairs that we saw were there were multiple signatures, #47 only had one autograph and that was from Barack Obama.

And for more interesting facts, Obama was on a state visit during the time that he was awarded a Nobel Peace Prize in 2009. His schedule was so packed that there was opportunity to visit the museum. Instead, they had to bring the chair to the Grand Hotel where the laureates stayed. Obama signed the chair from his room.

It is the little quirky experience like such that I enjoy when I visit a place. I’m glad that I was able to find someone like Gustav to share that little piece of story with me.

It was our last night in Sweden. After leaving the mus

eum, we went to ICA Supermarket to purchase goodies to bring back home. After we shopped, we surveyed the area and decided on Forklets Kebab, a very busy local kebab restaurant. Man, that really the spot – Doner Beef Kebab, and Chicken and Rice Plate.

That was our last night in Sweden. We got home and packed and got ready for our flight the next day.  My next entry will focus on our flight back, more WOW updates, and finally my takeaways – the lesson I learned from this European trip. Thanks for following.