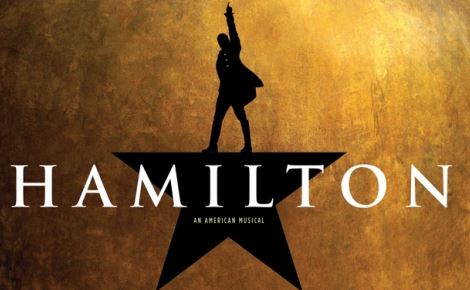 Do I really a need a reason to visit New York City ? All I need to hear is “NYC”, and you’ll hear me say…when, where? Sign me up. But if I really needed a catalyst, how about scoring tickets to Hamilton in the Spring of 2017? If you’ve been living under a rock, tickets to Hamilton are so difficult to get. Those who got them have sold them in the after market for more than their face value. More importantly, it was a show that I’ve been dying to watch since their days in New York’s Public Theatre, up until the time they moved to Broadway in August 2015. I traveled to New York and New Jersey quite a bit in 2014 and 2015, and I’ve attempted to get “regular” priced tickets…NO. SUCH. LUCK.

All I had going was the cast recording, and that triggered a shared love with my family for the music and genius that is Hamilton. Other great friends and my Hamilton family aka “Hamily” also share the same admiration for this blockbuster musical on Broadway. Most of them have seen the show, meanwhile, I patiently waited for my turn. I’ve had an opportunity to watch it in Chicago and passed, San Francisco and passed. I want my first chance to catch it in no other place than New York City. “I’m willing to wait for it.”

Well, I got wind of the presale opportunity for American Express cardholders. Not all Amex cards, but only those with Centurion or American Express Platinum (personal) and American Express Business Platinum which I happen to have. While I had presale access, that didn’t really guarantee anything. So on June 7, 2016, very early Tuesday morning, I had my three gadgets up. My iMac, my MacBook Air, and iPhone – all three were ready to sign in to Ticketmaster at 7am PT (10am ET).

Well, it wasn’t exactly a walk in the park to get tickets to Hamilton. I wasn’t the only one in the world with an Amex Platinum or Centurion card. I was in timeout, in clocking limbo, and didn’t really know if I was moving forward or not. At 7:30am,  I called American Express because Ticketmaster kept asking me for a presale code. According to Amex, I didn’t get a presale code because I live on the West Coast. Grrrrr!!! I was livid. So the guy gave me a presale code.

I went back online, and waited, and waited, and waited in the Ticketmaster queue. It wasn’t until 9:45am (over 2 hours later) when I finally got in to get tickets. I needed four tickets. My needs were specific, I needed tickets anytime between April 6 and April 12. I checked every one of those dates and all that remained at the “regular” price were towards the Rear Mezzanine. I’m not really a fan of sitting that far back especially if it’s my first time watching show, and I have to travel cross-country for it. 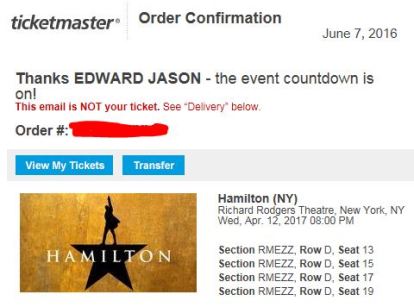 The lowest priced seat was $179, with the highest at $199. I was willing to pay $199 for the better seats but those were all gone per the Ticketmaster site. That was just after two hours!!!  So I decided to go ahead and purchase the seats for the Rear Mezz. What the heck!?!  I have a couple of friends who sat in that section and said that they weren’t that bad at all. Plus, if I were to buy these seats from Stub Hub, it would be over $500 (see first picture up above) if not more. Fine. Whatever. Done. Tickets to Hamilton in the Spring of 2017 have now been purchased.

Two days later, one of my favorite bloggers, The Points Guy, posted an article on How to score cheap Hamilton tickets and get better seats. At first, I didn’t pay attention to the article. It wasn’t u

ntil I got home from work when I read the article. The advise was to go through American Express Concierge Service, and not buy via Ticketmaster. So I followed the advise. I called Amex Concierge, I spoke with Rex who, as a concierge, he searched for tickets on my behalf. I gave him the dates I had in mind. To my surprise, Rex came back with Orchestra seats, Row B, 3rd Row on April 7th for $199. No brainer….I purchased four tickets at this section…SOLD. What did I do with the Rear Mezzanine tickets, I sold them to my Hamilton family, my Hamily, Iris and Ivan. They, too, will be heading to NY with their mom and dad.

It took 9-10 months of waiting to get to this day, and it finally came. I will write another blog entry on the events of the past day and a half, but I decided to dedicate this to anything and everything Hamilton. So, Tracy, you’ll be on the next blog entry, okay?  🙂

Since we were a party of six, and we only had four tickets to Hamilton, we needed to make a decision as to who would go. Well, Ethan was already lucky enough to watchDear Evan Hansen with me on our first night in NYC, so he was willing to give up his Hamilton seat. So the plan was to try the Book of Mormon lottery. There were six of us, and the chances were pretty high that at least one of us would get picked. One winner could get up to two front row orchestra seats for $32.

As luck would have it, we won! Not just one name, but two names from our party got picked. First it was Madison’s name (always so lucky with lotteries). When her name got called, we knew we were set that all six of us would be watching a Broadway show that evening. A minute later, BAM….Nancy’s name got called. Since we had no need for another set of tickets, we graciously turned it down.

So who goes to Hamilton? Now that we had Book of Mormon tickets, Ethan and Caitlin were to go to Book of Mormon, while Nancy, Madison, Evan, and I were slated for Hamilton. We had an hour to kill, and right before the show, I met up with a childhood friend from Oxnard, California. More details on the next blog, okay, Lionel?  🙂

After meeting up, it was time to go to our shows. Nancy surprised Ethan and gave him her Hamilton ticket. She decided to go to The Book of Mormon instead with Caitlin. Ethan was speechless….”that’s your Mom, E.” So there! For Hamilton, it was Ethan, Madison, and Evan who got to go with me.

We arrived at the theatre just past 7:30, and there was a long queue to go inside. There was a buzz. We’ve been listening to the Original Broadway Cast Recording for over a year now.  And we waited for this moment for close to ten months, and there we were just steps away from walking inside the Richard Rodgers Theatre on West 46th Street.

We lined up, had our backpacks checked by security, and we all walked in to the Orchestra, front Orchestra. The four of us took a picture. I can tell you this. There were not many kids, and I feel so lucky have brought my kids with me. People stopped us, and reminded the kids that they were so lucky be “in the room where it happens.” I sat with Evan, while Ethan and Maddie sat next to each other. We were all sitting on the third row, on what could be the biggest musical blockbuster on Broadway of all time!

So what’s my first-ever review of Hamilton? I’ve been talking about this show so much that people assumed I’ve seen the show. NOPE. This was my first time to watch Hamilton. Before, during, and after the show….I was on a Ham High!!!! It was so worth the wait!!! It was all about putting the puzzle pieces together. Prior to tonight’s show, I just listened to the recording and had an idea who sang the big song selections….but I didn’t really know

who sang what when it was an ensemble or a group song, and to witness and see the dance routines along with the songs, that was just amazing! The cast was superb, it was a well-oiled machine. The staging, the blocking, the lighting…..the costumes…so vividly vibrant. I’ve watched documentaries and musical numbers performed on TV, but seeing it live, up close….so worth it! There were so many fine moments, one of my faves? The Battle of Yorktown, been a favorite for a long time, and I was glued! And of course, Wait for It….Aaron Burr was just fearless. So glad I got to see Javier Munoz as Hamilton. He was Lin-Manuel Miranda’s understudy and he took over the role when Lin left the show in July. Javier’s Hamilton or shall we call him, Javilton, had charisma in his eyes. That’s why I love being up close when I watch live theatre. I get to look in to the eyes of the performers and it’s just magic.

Was Hamilton worth the hype? NO DOUBT, Gwen Stefani! It was hard not join the triumphs, the joys, the anguish, the pain, the victories, sorrows, and pitfalls faced by the characters. I would pay face value for the show. I wouldn’t mind waiting a few months for it, even if I were to do it all over again. But, wait a minute. I am scheduled to watch Hamilton…again! As in THREE. MORE. TIMES….I know, I know…freak!!!! Nancy and I will be watching it in San Francisco, Los Angeles, and wait for it…..London!!! We already have our tickets to San Francisco and London, and for Los Angeles, we should be getting that soon.

If you haven’t seen Hamilton yet, go! No need to get yourself to NYC. It’s coming to a city near you. If you want to catch it in Los Angeles, let me know. We are organizing a group to go watch the show in October and November.

It’s now the end of our Day Two in NYC, and after watching Dear Evan Hansen on Thursday, and Hamilton on Friday night, if today was our last day, I’d be happy to head back to California for this entire trip for it will all have been worth it.

Thank you for visiting my site. If you want more update on how to save on travels and get deals on shows like Hamilton, follow my blog, and my DaddyTravels Facebook page (click here).  For instance, this was the credit card that

To take advantage of credit card deals that will give you lots of bonus point for travels and trips, the Chase Sapphire Preferred is a perfect starter card that could easily get you 2 FREE roundtrip tickets from anywhere in the US to NYC or Hawaii, or just about anywhere. It’s also good for anywhere in the world.