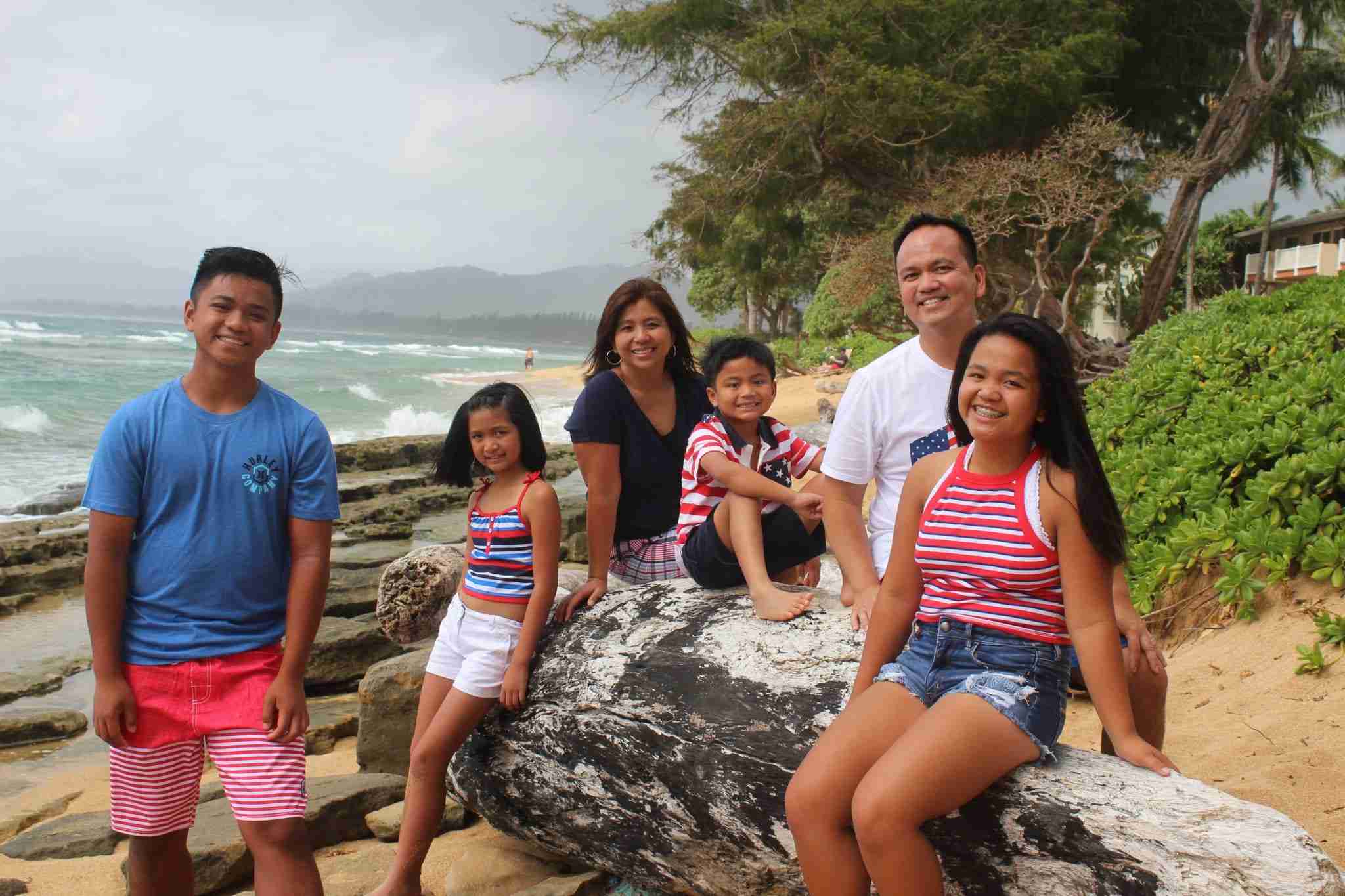 We started our day with me making our breakfast. It was pretty simple in my books…my home cooked breakfast plate of garlic fried rice, fried egg, Spam, and kimchi

topped with nori flakes. I paired that with the Kauai coffee provided by the timeshare (Kauai Coast Resort aka KCR) and we were set.

It’s the Fourth of July, we got ourselves ready for the day. Again, we had no definite plans other than going to Poipu and just see where the wind would take us. We brought with us holiday outfits of red, white, and blue to celebrate America’s birthday. We stayed on the grounds of KCR and took dozens of pictures. Shortly after, we also found ourselves on the beach just outside the resort. Happy Birthday, America. This was our family photoshoot with many thanks to our tripod.

It was already past 10am when we left KCR. Again, as we left the resort, I did see slow traffic headed towards Lihue. I knew that there would be a slowdown so I made a left and got on the road. Well, it turned out to be really slow. I thought the traffic would clear up just before the Wailua River stoplight. But it didn’t. We were led to a detour on the right side, opposite the Hilton Garden Inn. It was an unpaved dirt road. The fastest we drove was 10-15 mph. This added another 20 minutes of slow drive time. We somehow found ourselves back on Kuhio Highway. I wasn’t exactly sure why there was this detour.

It was past 11am and we’ve built a bit of an appetite. Before leaving KCR, I called Tip Top Cafe, a favorite of mine for many years. It was a holiday, and thank goodness they were open that morning. We got ourselves situated and ordered Loco Moco, Fried Chicken, Pancakes, and of course, their famous Oxtail Soup. That was our late breakfast/lunch. It was so delicious. Tip Top remains as part of my absolute must visit whenever we’re on the island.

Finally, we made our way to Poipu. Again, no GPS. We knew exactly where we were going. But first, I had to make a pit stop at Koloa Fish Market. I wanted to check out their specials today, and voila….they had their Sweet Potato Haupia Pie. Joy!!! I also ordered Kimchi Tako Poke to go with the my home cooked rice that I brought along with me. Yaaasssssss!!!!

Now, on to Poipu. We found parking right away which I found strange since I was expecting the beach to be super crowded on the Fourth of July. But not complaining here. We hung around and swam and played in the water. It was good to be back in Poipu. Perfect for our family.

By 3pm, we decided to head back home. We were on the fence whether we’d watch the fireworks. We were open to just heading back and relaxing at the hotel. So that meant that we’d be eating at KCR. We bought a few items at Fish Express, seaweed salad and ahi poke. It’s a good thing we had our cooler with us to keep these items cold. Before making it back to KCR, the kids suggested Shave Ice. Of course, we obliged and took them to Ono Ono Shave Ice.

While we waited for our Shave Ice, Ethan showed Nancy his leg. He had an insect bite the night before, and his right calf was a bit swollen. Afraid that it could get worse, Nancy got on the phone with our health insurance, Kaiser Permanente, and inquired about a hospital or clinic that could take a look at Ethan’s leg. So from Kapaa, we drove all the way back to the Costco area (a 15-20 minute drive) to bring Ethan to the Urgent Care. While Ethan was seen, I stayed with the rest of kids in the lobby. At the end of it all, Ethan was given a shot to help prevent infection and decrease the swelling on his leg.

Aaaahhhhhh…..so that somehow changed our evening plans even more. We still had a chance to watch the fireworks. It was already close to 6pm when we left the Urgent Care facility. Since we were in Lihue, I called Hamura Saimin, and thank God, they were open! That’s what we had for dinner….Saimin, BBQ skewers, and Lilikoi Chiffon Pie. Thank you, Hamura Saimin!!!!

We got back to our timeshare before 8pm. For so many years that we’ve returned to Kauai and stayed at KCR, we’ve never had the opportunity to try Hukilau Lanai (a highly-rated restaurant located on the property). Now that we have grown kids, we were able to leave them in the room, while Nancy and I got ready for a late night meal.

We opted for Poke Nachos, Lobster Bisque, and for dessert Original Hawaiian Chocolate (aka Lava Flow).

That was a perfect way to end our Fourth of July. We hope you all had a safe holiday.