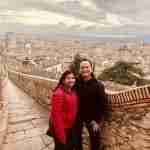 This visit to Spain is a combination of revisiting familiar places, and of course, discovering new sites. We did think of flying to another city or country outside of Barcelona, but we just didn’t want to mess with going back to the airport anymore. So Nancy and I decided that we’d plant our feet in Barcelona and go on day trips instead.

Saturday morning came. We walked across the street from our hotel, AC Sants Hotel by Marriott, towards Barcelona-Sants, one of the major transportation hubs in Barcelona. We planned on going to Montserrat, but once we got to the ticket office, we were told that tickets to Montserrat were sold out of Plaza España which was about 10-15 minutes of walk. Since we had no concrete plans in visiting Montserrat, we decided to go to Girona instead. The ticket lady said that it would be cheaper if we bought the tickets using one of the local trains. She read my mind. I used the Renfe kiosk and bought two roundtrip tickets to Girona for about $39 total. We got on the train before 10am, and headed for Girona. I’d say it was about an hour and a half train ride.

Once we got out of the Girona train station, all we did was moved towards the left side and just followed the road.

We somehow found ourselves on one of the first bridges with the colorful buildings in the background. It gave us an opportunity to take dozens of pictures, including the popular, Pont De Vedra.

Walking around Girona reminded me so much of Venice where every turn provided a surprise. I had no idea what to expect in Girona. All we wanted to do was to get away from Barcelona and we surely got our wish.

It was hard not miss the cathedral, the towering cathedral stood majestically and it invited us for a visit. It was the steps leading up to the cathedral that was unforgettable. I wouldn’t classify it as being especially crowded but I’m glad that we weren’t elbow-to-elbow with the other tourists.

Shortly after, we found ourselves at the Arab Baths. The admission was free. I’m not sure if it’s always free. But there was a little ticket office and a handwritten sign saying it was free. Upon entering, you’ll see the little pool of water, and there were quite a bit of rooms dividing the Arab Baths. It wasn’t brightly lit, but you get a sense of of spa-like space during that time period.

As we walked past many shops and restaurants, we did stop by Rocambolesc Gelateria.

I had the violet coconut gelato – so smooth. It was like eating silk (not that I’ve eaten silk, but I imagined it would be as smooth and fine as this was. I added strawberries and hazelnut. It wasn’t exactly hot that day, but it wasn’t cold either.

For lunch, we ate at Nibble in Plaza de la Independencia. This place was swarming with restaurants and I was surprised how inexpensive the food was at Nibble. I had Bibimbap and Nancy had traditional toast with tomatoes.

Before heading back to the station, Nancy wanted to see Passeig de la Muralla – known for its high walls and sprawling views of the city. The challenge was not seeing any good signs how to get to this place. And we had to walk back up behind the cathedral. We trusted our instincts and just kept walking. We eventually found it and found relief that we did. Honestly, it was worth it. There were really no clear signs so if you decide to go, make sure you ask around.

Once we got out of the high walls, it took about a half hour of casual stroll back to Girona station. We made it back to Barcelona by 7:30pm. It was great to head out of Barcelona, and I was glad we made the trek outside the city.