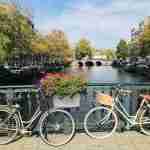 Our flight from Los Angeles left on time. Before making it to Barcelona, we had a layover in Amsterdam. We had a 10-hour flight that went smoothly.

We sat in a row with 3 seats, but no one was assigned to sit next to me and Nancy which gave us more room. We were able to sleep well during this flight, got to stretch for a bit, and before you know it, it was already 10 hours later and we touched down in Amsterdam’s Schiphol Airport.

When I planned this trip to Barcelona just three weeks ago, I had an option to get there with a 2 hour layover in Amsterdam, or with an 8-hour layover. I opted for the latter. I checked the time of the layover, and we’d be arriving mid-day, and 8 hours would be a perfect way to see a few things in Amsterdam before making our way to Spain.

Is there a rule about layovers? Well, if the layover was less than 4 hours, I wouldn’t even have attempted to leave the airport. It takes time to deplane, to go through customs, and to travel outside of the airport. So you could say that if it was a layover of 6 hours or greater, then yes, consider doing something outside of the airport (especially if you arrive mid-day).

We arrived just a little after 12 noon, and our flight to Barcelona was scheduled to leave at 8:35pm. This gave us under 8 hours to play and explore Amsterdam. After deplaning, we had quite a long walk from our gate to Arrivals Hall. We showed our passports, and we were off to Amsterdam.

Where to leave your belongings

But first, we opted to leave our carryon luggage at Baggage Storage at the airport. It was 6 euros per luggage. How convenient.

We had our carry on luggage with us and we were charged 6 Euros per luggage. Not bad. I’d rather leave them safely at the airport than drag them around the city.

From Schiphol Airport to Centraal Station

Once we left baggage hold, we headed to the train station. We took the train which was right onsite. We bought two tickets to get us to Centraal Station. The cost for me and Nancy was just under 20 Euros total.

The train ride to Centraal Station was quick. Nancy timed it – it was under 12 minutes (nonstop). We had no big plans but to walk around for a bit and see where our feet would take us. Having Centraal Station that close to the airport made it very convenient for us who had a layover.

From Centraal, we walked towards Dam Square. It was about a 15-minute walk from the station. It was a cool, breezy fall afternoon. Lots of people were walking. Lots of bicycles.

From Dam Square, we headed towards Anne Frank’s house. We didn’t buy any tickets since we didn’t know if we’d even make it out of the airport so we just walked there and checked out the scene. It was crowded as expected, lots of people were in queue.

We  made it to many of the bridges. We took lots of pictures of the canal, we finally have pictures of ourselves with the bicycles and canals in Amsterdam.

We didn’t want to take too much time in the city, and didn’t want to risk getting to the airport late. It took about a half hour to casually walk towards Central Station without rushing. We ended up ordering fries from one of the many stands. It was a thing to eat.  So, why not?

We got on the train by 5:30pm, and made it back to Schiphol Airport just in time four flight around 8pm.