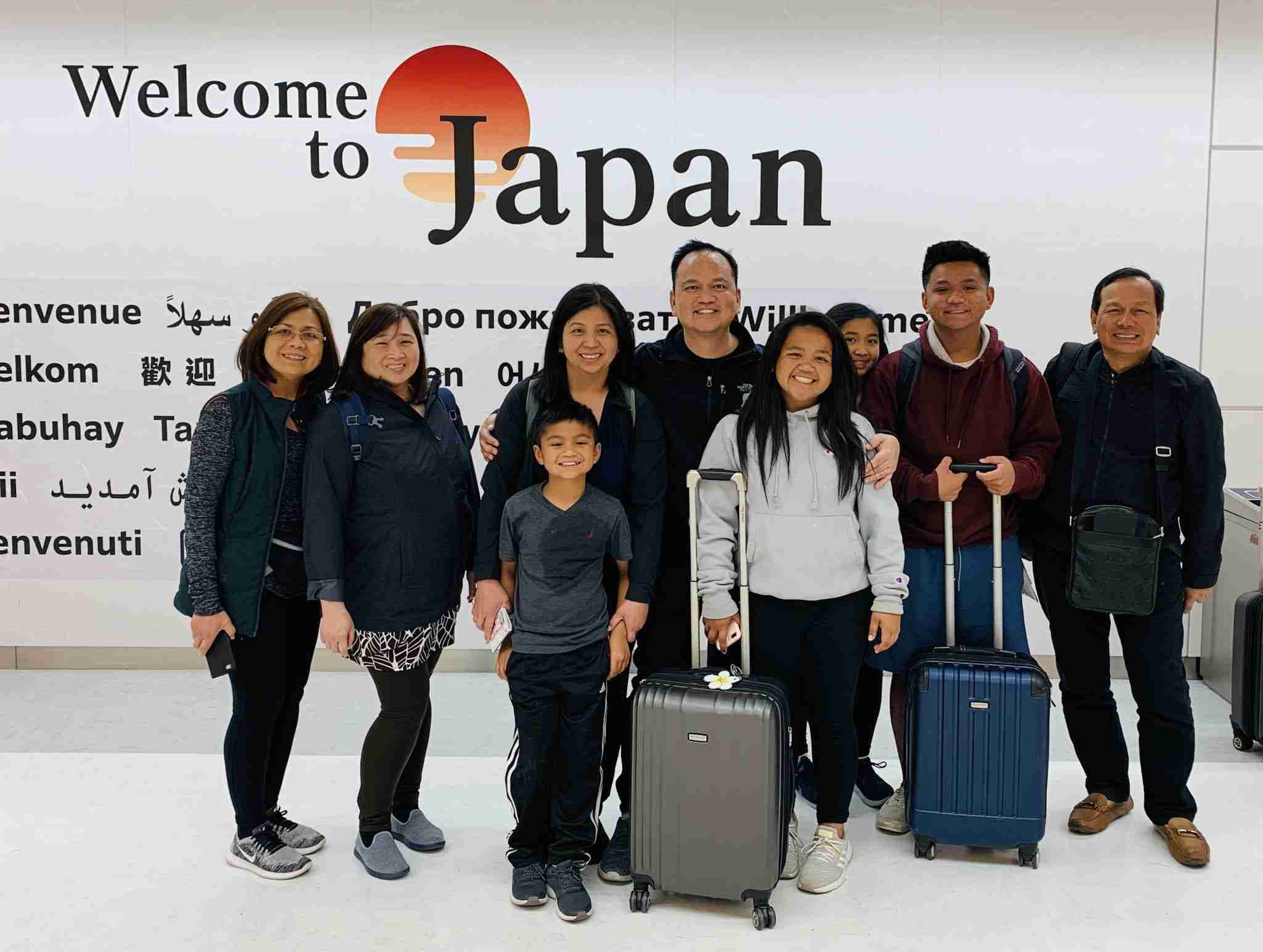 At 12:20pm, our ANA direct flight to Japan began its boarding process. No issues. We all had our carry ons and backpacks and found our seats.

First impression, the economy seats were roomy. The kids were thrilled with the movie selections. Me? I just wanted to sleep. I was so tired during my drive to the airport. Once I got on the plane, I dozed off quickly before take off.

For my in-flight entertainment, I watched Green Book. It was the movie that won Best Picture at the Oscars in 2019. What a fantastic movie. I also watched Argo, another Best Picture from a few years ago. I love Argo, and I love watching the suspenseful climax in the movie. I also watched “If Beale Street Could Talk” where Regina King was named Best Supporting Actress. I guess you could say it was an Oscar-worthy inspired flight to Japan.

Ok back to ANA, the flight attendants. Talk about service with a smile. They were cheerful and attentive. For the beverage service, I kept it simple with just getting sparkling water, ice, and lemon. For lunch, I had the Creamy Seafood Doria. There was squid and shrimp, prosciutto on side, egg, edamame, noodles, and salad, and bread. The meal capped off with Haagen Daz Vanilla Ice Cream.

Two hours after the lunch service, I got up and went to get snack and soup. That kept me and my family fed. We’re so used to flying economy seats, and there was nothing to complain about ANA’s. The kids were able to sleep well during the flight. I chose to fight not to sleep because I want to make sure we get our full sleep once we get to Japan.

The flight attendants had a service with a smile. That’s always a major factor knowing that you could easily approach them with any of your needs.

While it was a first for many of us to explore Japan, this must’ve been my 3rd or 4th time arriving in Narita. I’ve been at this airport a few times in the past while en route to the Philippines, and most recently to Singapore. It was a good 10-minute walk down to Customs and immigration. We had our fingerprints and pictures taken. No major questions were asked. It was a breeze.

We easily bypassed baggage claim. The beauty of traveling with just a carryon and backpacks? We had nothing to claim. We headed out and made it to the main arrivals hall.

We’re on our own. No tour guide. Just us. We had to take care of airport business as we made our way to our AirBNB.

Nancy found many ATMs off to the left side. As I stated in my previous entry, we brought our debit card with Charles Schwab, which allowed us to get cash anywhere in the world and not have to worry about ATM fees. We didn’t get all the cash we needed, just enough for the day. Why? We could always get cash anyway and the fees will be reimbursed to us.

Also, we didn’t bring any Yens from the US. It’s better to get the money locally in Japan. The exchange rate is better when using a local bank ATM in Japan. Here’s what I wrote. Scroll down to #4.

Ok, so the madness begins. We had the address to our AirBNB. Our only guide was to use Google Maps to dictate where we needed go to. According to Google Maps, our train ticket would cost us 973 Yen.

Nancy learned that it’s best to get a Suica card. We were able to use a Suica vending machine to get our tickets. Evan, who is 9 years old, gets a discount. We had to go up to a counter to get his discount.

The train to Yotsugi Station

We then headed to the terminal and caught the train. Google Maps tells you exactly what time the train departs, and from which platform it will depart from. As long as you follow the signs, then you’re good. Here’s our route to our AirBNB.

We made it to Yotsugi Station in just over an hour. I get a bit anxious on Day One of every vacation, just to make sure we make it to our AirBNB. Oh I forgot to mention, we also had my Google Project Fi SIM card which aided us with having internet and phone service.

We just followed Google Maps’ step by step, turn by turn tips, and we made it to where we were told to go. However, there were no clear signs of the house number. So we just stopped around the area wondering if we actually made it to the right house.

After 10-15 minutes, a gentleman walked down from his house and pointed and murmured in Japanese and pointed to the keypad. Thus hinting that we’re in the right place. He didn’t say if he was the owner or manager, but seemed fairly confident that we were the renters for the next two days.

Ok, our AirBNB deserves a separate entry. So that’s next.

In the meantime, to the inquiring minds:

How can I begin earning points to travel for nearly free?

You have an option to begin flying for nearly free, but you will need miles and points. There was always one card that stood out, perfect for a lot of those who are getting into the game.

The Chase Sapphire Preferred (click here) is a perfect starter card. With its 50,000 bonus points, those points alone have gotten us two tickets to Hawaii, just as an example. The sign up bonus alone can be worth as much as $1,000 or more in travel.

– 60,000 Ultimate Rewards sign up bonus after $4,000 in spend in the first three months
– Points are transferable to:

– Points are worth 1.25 cents each when redeemed through the Ultimate Rewards travel portal
– Primary rental car collision damage waiver
– Earn 2X points on all travel and dining
– $95 annual fee

If I were just starting out in earning miles and points, I suggest starting out with this card,  the Chase Sapphire Preferred. We have two upcoming trips in 2019 and we’re very excited.

I wrote different entries on How We Travel for Nearly Free, and most recently, I updated my favorite travel credit cards. I’ve also written this recently:

To apply for my favorite Top Travel credit cards that I use most, click here

Lastly, here Reader Success Tales that I featured on my site.